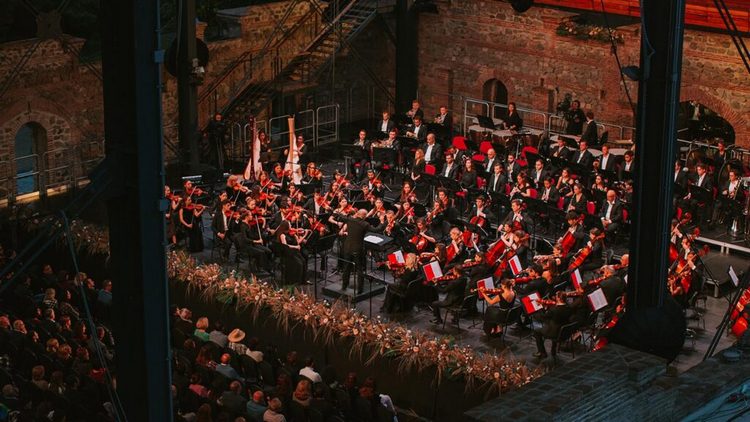 Established names of international scene, from pianists Lucas Debargue and Mao Fujita to Ukrainian conductor Oksana Lyniv and others, will be on stage of this year’s Tsinandali Festival in a historical estate in Georgia’s east, with the event also set to showcase some of the brightest young domestic talent.

The 10-day celebration of classical music, hosted in specially set up spaces of the Tsinandali château in the eastern winemaking Kakheti province, will bring dozens of recognised artists in two shows on each of the days of its latest edition starting next week.

Lyniv, the first female chief conductor of an Italian opera orchestra with her position as the General Music Director of the Teatro Comunale di Bologna, and Fujita, an award-winning young pianist, will join the Pan-Caucasian Youth Orchestra for delivering the opening show of the festival bill.

The two established performers and the orchestra, – set up to bring together musicians aged between 18-29 from across the region under the guidance of Gianandrea Noseda, the Musical Director of the festival – will offer their renditions of works of Johannes Brahms, Ludwig van Beethoven and Bohdana Frolyak.

The opening event is aiming to set the tone for the programme that will involve the likes of Debargue – a young pianist recognised since his notable performance at the 2015 Tchaikovsky International Competition in Moscow – as well as the prize-winning cellist LiLa and pianist Seong-Jin Cho, and other celebrated names.

While the Pan-Caucasian Youth Orchestra will again take to the stage to close the festival’s 2022 edition, their performance will come after organisers set the stage for a celebration of up-and-coming Georgian artists.

The Pan-Caucasian Youth Orchestra, involving performers from across the region, will feature in both the opening and closing shows of this year’s event. Photo via Tsinandali Festival

In the penultimate event of the programme, pianists Giorgi Gigashvili and Sandro Nebieridze will be delivering a noon performance of works by Igor Stravinsky and Maurice Ravel. Gigashvili is a recipient of two prizes at the 2019 Ferruccio Busoni International Piano Competition, among other honours, while Nebieridze was a teenage joint winner of the Grand Prix award at the 2016 Grand Piano Competition in Moscow.

This year’s festival marks its fourth edition, with the project launched with a focus on regional promotion of music and creation of “rare opportunities for young musicians from the Caucasus and neighbouring countries”.

The latest edition will run between September 2-11, with the full line-up of artists available on the official website.