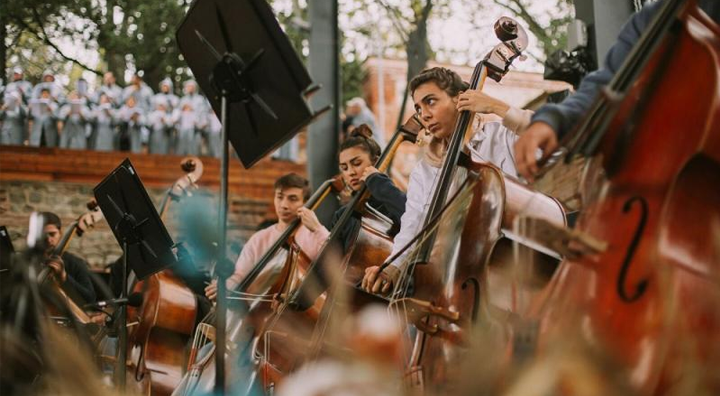 Two hours’ drive from Tbilisi over a beautiful mountain pass, lushly wooded on the descent, the Tsinandali Estate has been central to Georgia’s wine-growing district of Kakheti since poet-prince Prince Alexander Chavchavadze produced the first bottle in 1841. Natives and overseas tourists come to wander the English-style arboretum, described by Alexandre Dumas the Elder as the Garden of Eden, and visit the modest palace where rakish Russian writer Griboyedov putatively seduced his host’s 16 year old daughter Nino, married her and travelled with her to Iran, where he was promptly murdered in Teheran. Now millions have been spent on a state-of-the-art outdoor concert hall and indoor chamber venue up the gentle slopes from the main house, capped by a luxury hotel for international guests, and this year Tsinindali launched its first full-scale festival with star-studded events and two essential projects involving young musicians more than worthy of the location.

George Ramishvili’s Silk Road Group may not in itself be a purely philanthropic enterprise; it’s been responsible for some grandiose developments down on the coast at Batumi, not least one left in pieces by a broken pledge from You Know Who to then President Mikhail Saakashvili over a 47-storey Trump Tower. But Ramishvili is altruistic and sincere about his investment here, first in the restoration of the Estate and now in “the bright and peaceful future of the talented young musicians of this region”, 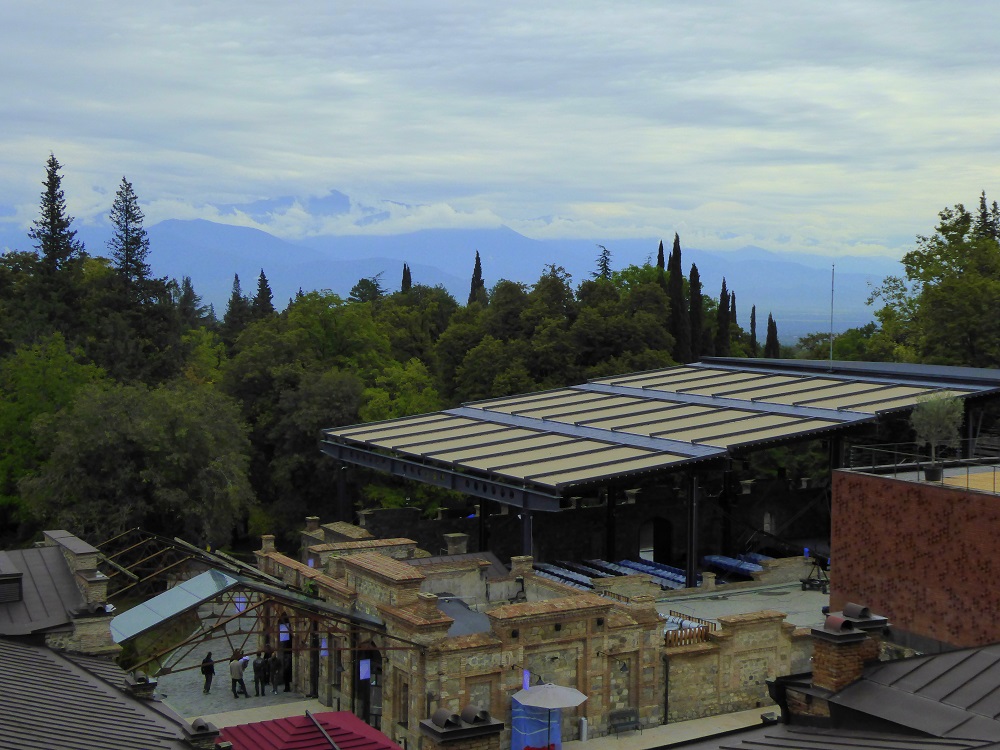 He chose well as his co-founders and artistic directors festival doyens Martin Engstroem and Avi Shoshani. They assured the greatest of visiting artists and the residency of one of the most alive and sophisticated young ensembles in the world, the Verbier Festival Chamber Orchestra. But the phenomena which really give the festival its distinction – and the two reasons I felt I could justify coming – are the Festival Academy led by six of the world’s greatest mentor-musicians and the foundation of the Pan-Caucasian Youth Orchestra under the guidance of the festival’s music director Gianandrea Noseda.

This is an astonishing league of young players aged between 18 and 28 from Armenia and Turkey – who don’t have the same immediacy of conflict as the Palestinians and Jewish Israelis of Barenboim’s West Eastern Divan Orchestra, but still have the responsibility of redemption – as well as from Georgia, Azerbaijan, Kazakhstan and Ukraine. It’s very much work in progress; by the time of the opening concert, players had been coached by 12 musicians from some of the world’s leading orchestras  before Noseda came to work with them for four days (he expands on the process in the Q&A to follow tomorrow). The discipline and focus of the strings was already phenomenal, brass and wind more erratic. But there’s something about the freshness of any youth orchestra tackling Mahler‘s “Resurrection” Symphony for the first time which can be literally hair-raising. 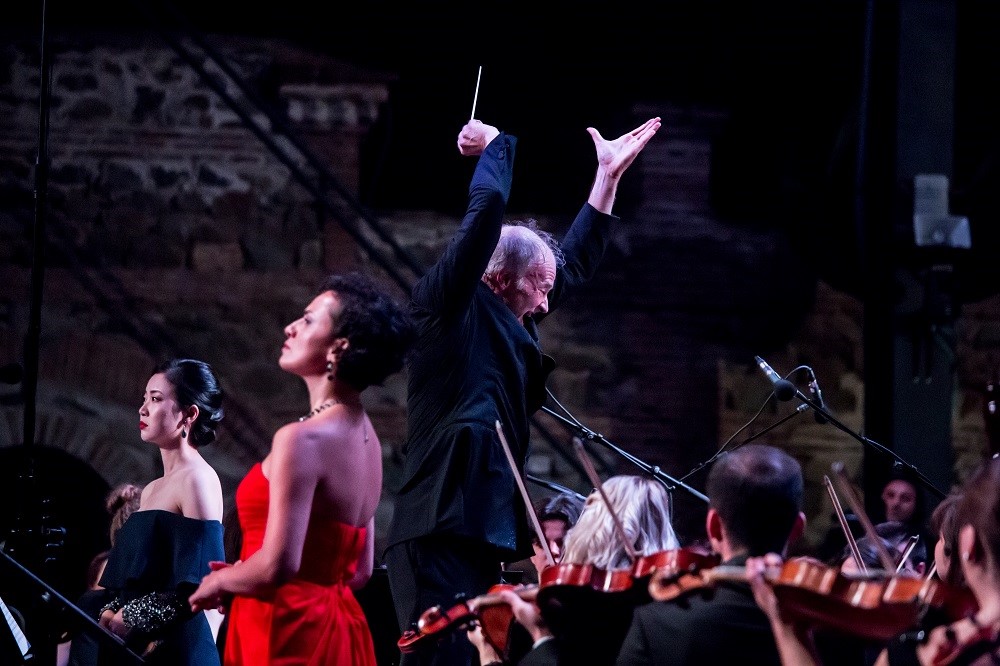 Noseda’s interpretation was typically speedy – helpfully so for the hellfire blazes of the outer movements, more baffling in the second-movement minuet.  The sweeping holocaust that blasts the human folly of the scherzo and returns at the start of the judgement-day canvas could hardly have been more overwhelming, a luxury afforded by the space, with crickets in the garden suddenly stridulating after the second magnesium flare. There was some wild pitching from charismatic Georgian mezzo Ketevan Kemoklidze in the heavenly meditation of “Urlicht”, but I’ve never heard a soprano rise more movingly from the chorus – magnificent Tbilisi State Opera forces – than Ying Fang, and I’ve heard a few (Fang, Kemoklidze, Noseda and the Pan-Caucasian strings pictured above)..

Meeting some of the young musicians a few days later, I heard from them that rehearsals for the second concert with Noseda promised a stupendous Berlioz Symphonie Fantastique, an upping of the game, so it was a shame to have to leave before that could happen (later concerts in the festival were to be conducted by Jukka-Pekka Saraste and Lahav Shani, with another remarkable roster promised for next year). I did at least catch the first of the VFCO’s concerts, removed because of all-day rain from the outdoor space to the chamber venue, and orchestrally it was dazzling. These top graduates of another major training project had a rapport with conductor Gabor Takács-Nagy is phenomenal (pictured below), much less so with Andras Schiff in Beethoven’s Fourth Piano Concerto since the nuance and sweep of the orchestral playing was nowhere reflected in Schiff’s approach – this was an often great pianist on auto-pilot. So it could hardly be a success. 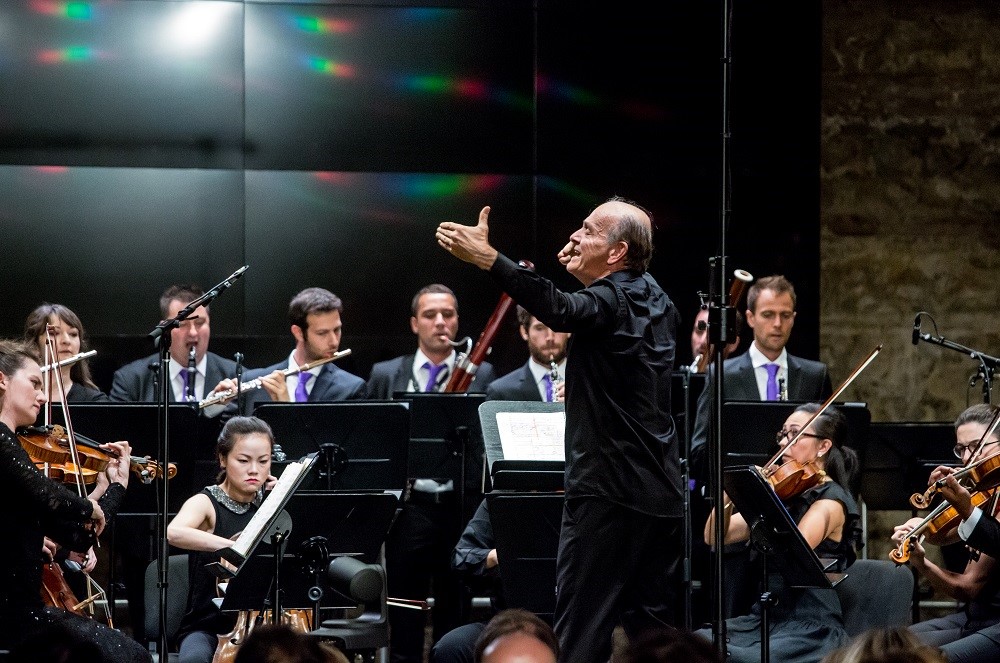 On the other hand, it’s easy to say with some confidence that there will never be a more vivacious and articulate performance of Beethoven’s Second Symphony (and that only weeks after a very fine one at the Proms from Yannick Nézet-Séguin and the Bavarian Radio Symphony Orchestra). The musicians watch and listen to each other throughout, from the rocking bass lines of Brendan Kane to the exchanges between oboist Vicente Castello Sansaloni and bassoonist Gabriel Bergeron-Langlois, leaning in to each other as they stood for the humorous exchanges that extend Beethoven’s finale. The young players’ presence around the festival was as life-enhancing as that of the Pan-Caucasian musicians.

Engstroem and Soshani’s roster of chamber-musical megastars was more approachable than in Verbier, given the more concentrated nature of the site, and though the hurl-them-together approach doesn’t always work in the Swiss mountain town, it absolutely did with the two trios I witnessed. That most poetic of pianists Nicholas Angelich made us see stars in the spellbinding slow movement of Brahms’s B major Piano Trio, a gauntlet effortlessly taken up by violinist Renaud Capuçon and cellist Edgar Moreau (another revelation new to me, the three pictured below), and it was token of their high seriousness that they gave us another Brahms slow movement, the Theme and Variations of the C major Trio, as encore. The Georgian ladies who lunch held their cameras aloft to film – again – but the superlative level of the playing rose above it. 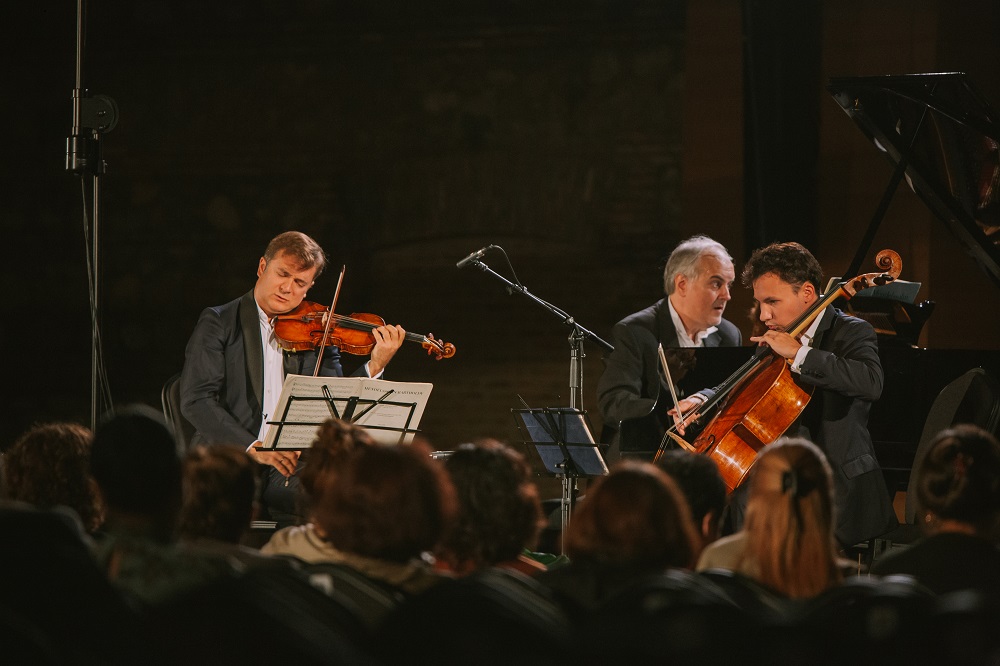 I’d worried about the form of veteran Pinchas Zukerman, but his was a lesson in seemingly effortless old-school style, with plenty of loving, not excessive portamenti in Tchaikovsky’s Piano Trio alongside cellist Amanda Forsyth and a young pianist partner, George Li – not perhaps the heavyweight Russian-school player one expects in this music, but effortlessly scintillating in many of the second-movement variations Tchaikovsky serves up in memory of a transcendental pianist, Nikolay Rubinstein.

Confession: I missed the first work on this lunchtime programme, Shostakovich’s Second Piano Trio, but in a good cause. I’d been down the hill to look at the pianos in the palace, including the French model with folding keyboard given by Griboyedov to Nino as a wedding present, putatively the first in Georgia, but I wasn’t expecting revelations in what I found on the last minute behind one of the doors in the basement of the Park Hotel beyond the gates  – a red Steinway, with teacher and young pianist working together in front of three other young musicians. 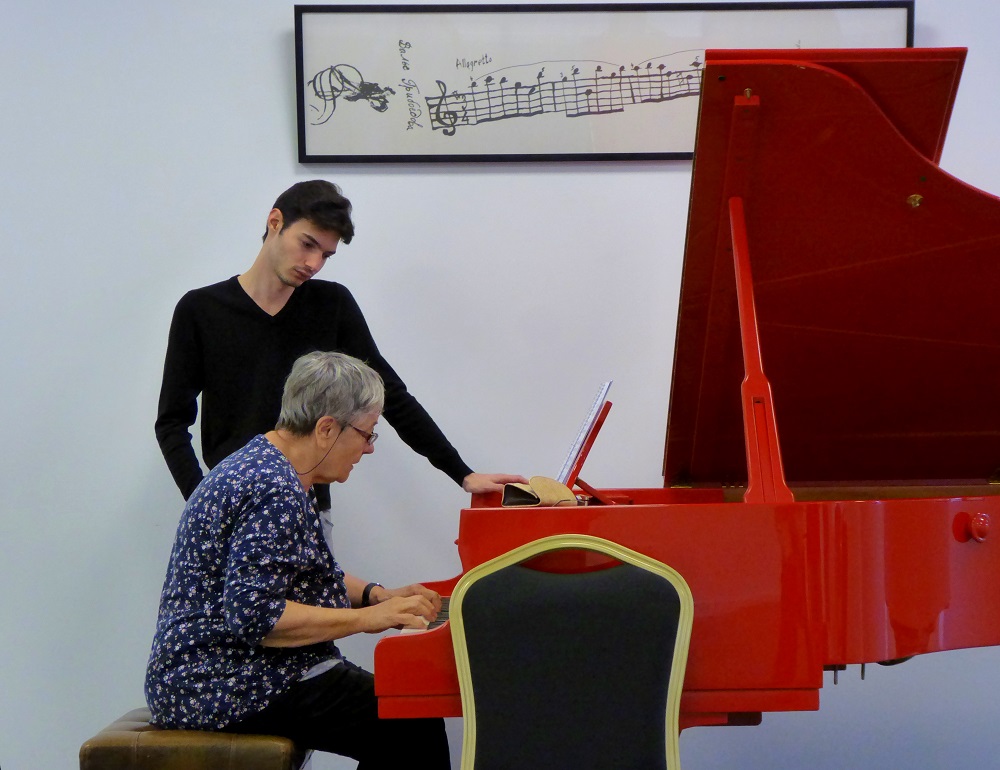 This is the base of the Tsinandali Festival Academy, and anyone is welcome to walk in and attend part of any masterclass that’s happening at the time. I’m glad I did. I probably learnt more about Beethoven in 45 minutes from Hungarian piano doyenne Rita Wagner – whose husband, cellist Ferenc Rados, is also a professor in attendance – than I have in the past two decades. I caught the end of her masterclass with Aurelius Braun on the long cadenza in the opening movement of Beethoven’s Fourth Piano Concerto and the whole of the time she spent with Adi Neuhaus on the ineffable first movement of the composer’s A major Sonata Op. 101.

Wagner has the meaningful animation and the wit of a professor half her age – three minutes in her company and you’ll want to do anything she suggests – and in return she expects no meaningless notes from her acolytes. Commending the flowing poetry of Neuhaus, she wanted him to tell her the feeling of the music at any given moment, starting with the beginning: open, private, hopeful, careful? And – just to take one example of many I noted – she talked about the openness, the mood of a dominant note, playing the opening of the Fourth Concerto at its slightly more closed, cautious pitch (top note a third above the tonic) and how it would sound with the dominant note on top. Believe me, these things can be vital in transforming a performance. And so the Shostakovich had to be sacrificed, and should I ever return, I’ll spend more time down at the Academy headquarters. 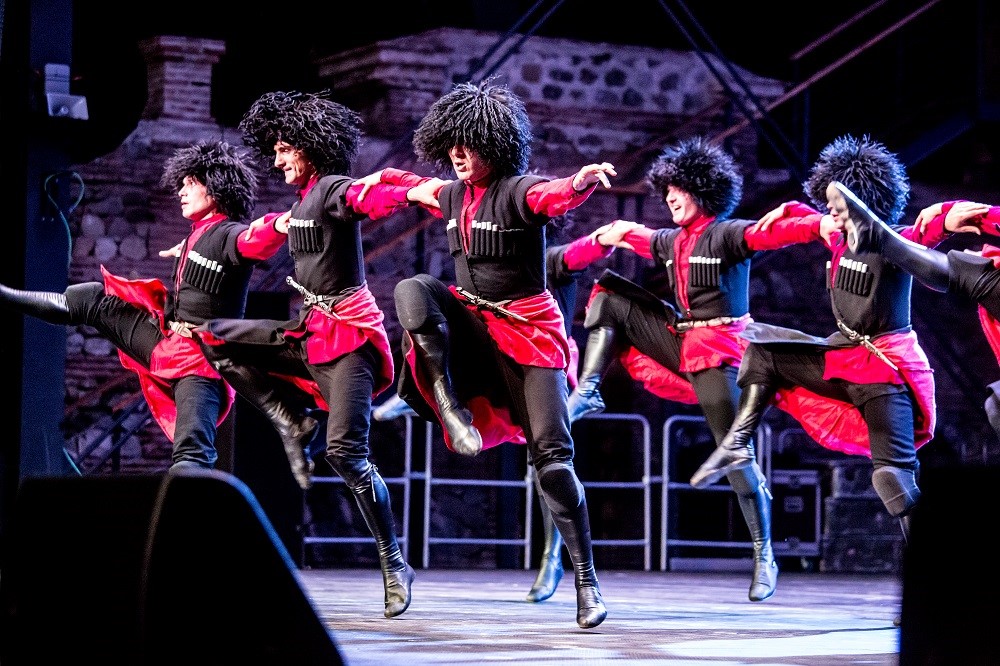 In the helpful bookending for the slice of festival I managed to attend, a second big event with Georgians to the fore was the last evening event of my charmed time in Tsinandali. This was very much a national spectacular, one which has toured the world but provokes near-delirium and wild recognition in a packed native audience. The male dancers of the Georgian National Ballet, along with a couple of the women permitted to break their feminine circlings, make the athletic choreography of the Bolshoi Ballet’s Spartacus seem tame. Real sparks flew in sword fights; male en-pointe sequences offset the incredible leaps; a seven-piece folk ensemble ran the gamut, wonderful to hear (at least once Noseda had gone and got the sound system volume reduced a bit). It was in total contrast to the absolute calm of the Alaverdi Monastery which I visited by a diversion on my way back to Tbilisi the next afternoon: extreme vigour and an other-worldly spirituality side by side in a culture of still-vibrant traditions.