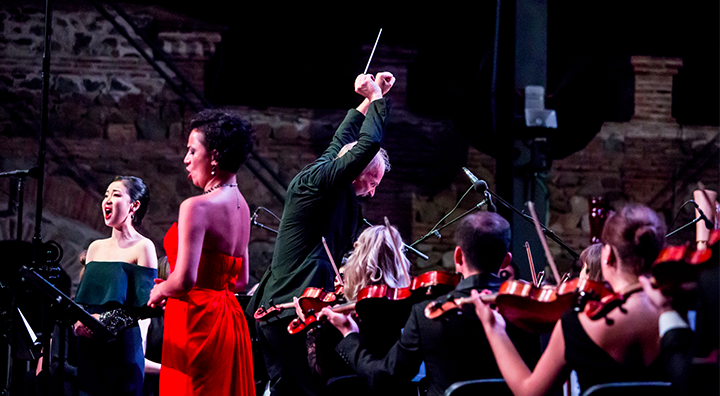 Joy of life and hope at the inaugural Tsinandali Festival

Driving from Tbilisi to Tsinandali, you realise this is not your everyday location for classical music. Women in rustic attire herd cows by the side of the road and distant wooden shacks pepper the rugged terrain. Part of the appeal of such remote events – such as the Verbier Festival, a Mecca for music lovers in the Swiss Alps, or the newly launched Riga-Jurmala Festival on the Latvian coast – is the adventure of getting there. But the Tsinandali Festival, set deep in the Georgian heartland, takes the overall effort, and the rewards, to another level. The breathtaking scenery, divine local food and warm Georgian hospitality makes for a winning combination: this late-summer addition to the festivals season promises to go far.

There were also fine musical rewards: programmes for the inaugural edition drip with class. There are superstar pianists like András Schiff, Yuja Wang and Fazil Say, and the very best rising conductors such as Omer Meir Wellber and Lahav Shani. Further highlights include the cellist Mischa Maisky, mandolin player Avi Avital and baritone Thomas Hampson. With the young pianist Sandro Nebieridze and violinist Lisa Batiashvili on hand, as well as the Georgian State Academic Ensemble and the Georgian National Ballet, there is also a distinctly national flavour. 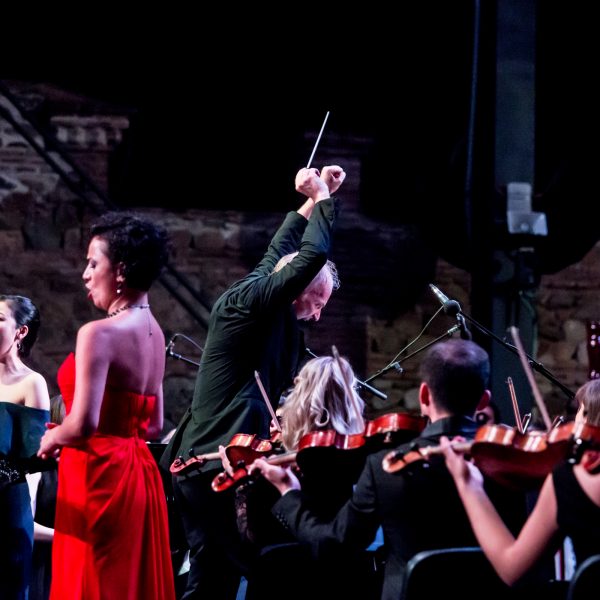 But, on the ground in Tsinandali, it was the Pan-Caucasian Youth Orchestra (PYCO) – the newly-formed flagship ensemble whose music director is Gianandrea Noseda – that generated the biggest buzz. Drawing players from Armenia, Azerbaijan, Georgia, Kazakhstan, Turkey and Ukraine, one aim is to bridge intercommunity divides. It was bold of Noseda to launch both the festival and the orchestra with Mahler’s unwieldy Symphony no. 2. The video of the live stream that is still available for viewing suggests the sense of struggle these young players communicated only did more to make this feel like a work of jaw-dropping propositions.

That the challenge of getting to Tsinandali is almost equally immense is all part of the fun. This is a festival for musical lovers with a taste for the distant unknown. Flights from most destinations will involve a stopover at Istanbul before continuing to Tbilisi. From there, it is a one-and-a-half hour drive in which rugged countryside cedes to awesome mountain terrain. As our driver swerved up the winding path, every bump in the uneven road was amplified by the car’s unyielding suspension.

Rolling into demure Tsinandali on concert night felt like entering another dimension. When the evening draws, in the estate springs to life. Guests trickle up suggestively-lit paths en route to the concert venues. A square formed by the entrances to the auditorium and the onsite hotel buzzes with activity. There are food stalls selling local delicacies; the air is filled with the clink of Champagne glasses. 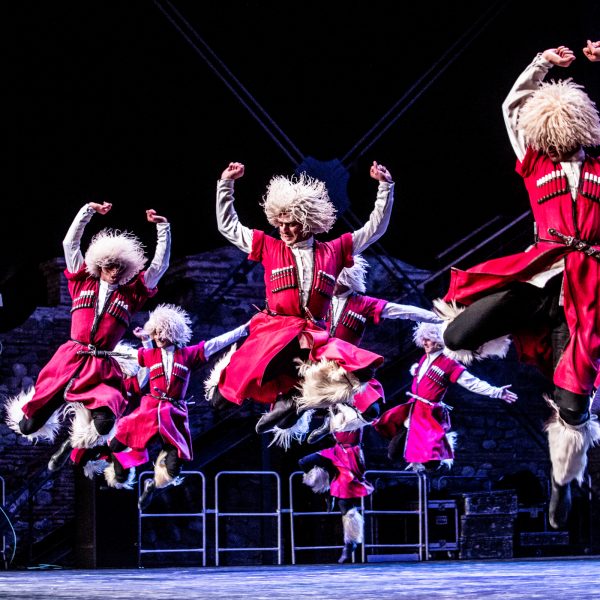 On my final evening, a performance from the Georgian National Ballet sent a shock of energy through the estate. This was visceral, virtuosic folk dance rather than elegant Western ballet. Courtly females glided across the stage, their shuffling feet imperceptible beneath flowing dresses. Warrior-like males spiralled, lunged and roared, specks of sweat flying from their hair and sparks from lightning quick clashes of their swords.

After such entertainment, the chance to sample Georgian fare is especially welcome. At Tsinandali, it felt that was never far off. There are stout dumplings packed with meat and cheese, fleshy vegetables and stuffed vine leaves, and Chaca – a Georgian variant of grappa. Tsinandali has a particular advantage when it comes to feasting. The estate was a one of the first producers in the nation of European-style wine; during the festival, local bottles never seemed scarce.

The estate is equally good as a place to pass leisurely days. Wander through the manicured grounds to Prince Alexander Chavchavadze’s palace for concerts or to see the local art collection. After the Soviets turned the building into a guest house and then a museum, it fell into disrepair. Silk Road renovated it in 2007, which became the start of a wholesale overhaul of the estate. The former winery was turned into a hotel (its exposed brick, designer lighting, wood panelling, antique furniture and airy enclaves make for a decidedly chic environment) and there is a second hotel with rehearsal facilities for the various orchestras the festival hosts. An open-air auditorium has been constructed above the former wine cellars. When Zubin Mehta inaugurated the space in 2018, amplification was provided but did not need to be used. Surprisingly, the cavity below the stage proved a more-than-adequate resonance chamber.

Afternoon concerts, which take place in the new Chamber Music Hall, feel laid back and convivial. Yet the standard of the playing is first rate. Many musicians featured at Tsinandali are familiar with one another from outings at the Verbier Festival – and it shows. Renaud Capuçon joined forces with his historic collaborator the pianist Nicholas Angelich and the young cellist Edgar Moreau for a programme of Mendelssohn and Brahms in which their affinity was evident. The Verbier Festival Chamber Orchestra alongside András Schiff gave a rendition of Beethoven that was explosive but refined. Even George Li, a player known for fiery displays, was a picture of poetic poise.

George Ramishvili, the Founder and Chairman of Silk Road, Georgia’s premiere telecommunications and infrastructure investor, is one of the main moving forces behind the festival. After the company acquired the estate, he gradually decided a classical music festival would be the best use for it.

In order to set one up he would need to bring in expertise. He therefore approached Avi Shoshani and Martin Engstroem, the creators of the Verbier Festival in 1994. It took persistence and diplomacy to get the busy impresarios to accept. Shoshani and Engstroem had a list of demands, including the creation of concert halls, an academy for musicians and the PYCO – and all of them were met.

Political tensions can feel like a distant reality in idyllic Tsinandali. But these are difficult times for Georgia. Just days before my visit, Russia bolstered its military presence on the border with Ossetia, an area it has controlled since 2016. Other Caucasus nations are not exactly on friendly terms. Firing broke out between Armenia and Azerbaijan in 2016. Turkey is still remembered as the perpetrator of the Armenian genocide 100 years ago.

Inspired by Daniel Barenboim’s West-Eastern Divan Orchestra, the PYCO aims to show what young people from hostile nations can achieve together. Youthful vitality pervades the Tsinandali Festival, with eager young players turning up to the recitals to absorb as much as possible. Chatting jovially as he tucked into his lunch, a beaming Noseda brimmed admiration for the orchestra’s rendition of Mahler 2. “I am really happy,” he said of the previous evening’s inauguration, his open arms addressing PYCO members. “That work was not the easiest thing to get right.”

Key to the success of Verbier is the Festival Academy. By feeding a stream of players into local programmes, it has become a creator of stars in the making. Founding a sister academy at Tsinandali was therefore a wise choice. Christian Thompson, the former director of the Verbier Festival Academy, has been brought in to manage it. “Many of the musicians here have come through Verbier,” he tells me. “Ana Kipiani [the Georgian pianist] was with me in Verbier when she was 14; now she’s 23. Edgar Moreau was in my academy. Before that, Renaud Capuçon was in one of the very first editions.”

Following the Georgian National Ballet’s performance, Noseda, delivering a speech in between courses of Georgian specialities, a glass of local wine coddled in his hand, paid homage to the Georgian spirit. Eating strawberries on his first visit to the country in 2000, he rediscovered the taste of the fruit: Georgians eat produce just at the right time of year – a homage to the population’s authenticity, he explained. “Being surrounded by stars makes everyone shine more brightly,” continued the conductor. But, for Noseda, more important than performances is what Tsinandali represents. “Spread the word about what this place represents: beauty, truth, hope and joy of life.”

James’ press trip to Tsinandali was sponsored by Premier Comms.