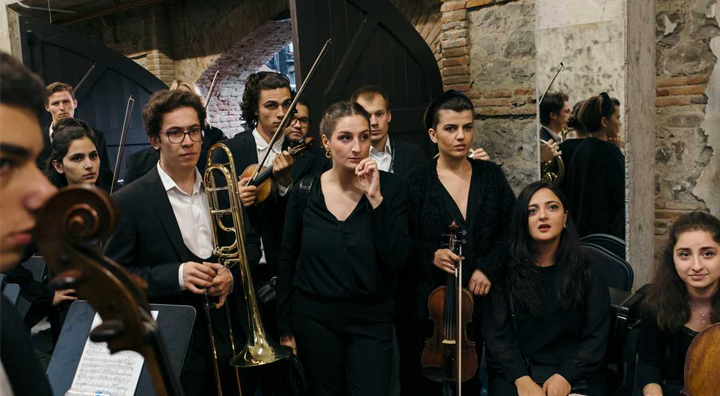 Georgia’s inaugural Tsinandali Festival is not merely a celebration of classical music. It’s also an attempt to bring together musicians in one orchestra from countries with fractious relations.

Backstage is a jungle: sharp cries and flat grunts rise through the air while the musicians tune their instruments. In a matter of minutes this orchestra will have to play together harmoniously but right now everyone is in their own discordant little world. Two Turkish brothers, who not long ago were adjusting each other’s shirt collars, exchange a few nervous words of encouragement; a Georgian cellist stands in a corner, arms akimbo and eyes uneasy. Treats are laid out on a table nearby – dried apricots, nuts – but go untouched. Slowly it dawns on the performers that the rain has stopped: the pitter-patter they can hear outside is in fact the audience filtering into the concert hall.

In many respects the inaugural Tsinandali Festival should be a disaster waiting to happen. Most of the 80 musicians in its flagship orchestra have never performed professionally; many are teenagers. Hailing from seven countries, including Georgia, Turkey, Armenia and Azerbaijan, they can struggle to communicate: during rehearsals in August they often resorted to broken English and simple gestures. And if history is to be believed, some are sworn enemies.

But once on stage, politics and national identity dissolve as the notes rise. This is the crux of the event, which kicked off in September in Georgia’s Tsinandali estate. Whereas most music galas look to simply put on a good show, this festival is about building regional ties through the universal language of music, sending a message of unity to the musicians’ countries. The manifesto: to create a Pan-Caucasian Youth Orchestra – which will go on to become a global touring fixture – and an annual, two-week festival that will put Georgia at the centre of the classical-music map.

“What we are doing here is unique,” says Avi Shoshani, the festival’s artistic co-director. “You can have an orchestra in the US with musicians from Alaska, Missouri and New York but it won’t carry the same message and won’t create the same special feeling as seeing a musician from Turkey next to one from Armenia. It shows that people, after all, are brothers.”

Shoshani is a veteran of the music industry. He’s been the secretary-general of the Israel Philharmonic Orchestra for 45 years and is the co-founder of the Verbier Music Festival, one of the most prestigious classical events in Europe. Still, even with his experience, he admits that creating something on a similar scale, in such a remote place as Tsinandali, sounded like a fantasy when Georgian telecoms tycoon George Ramishvili – the festival’s founder and financier – invited him to join the team three years ago.

Tsinandali, in Georgia’s Kakheti region, sits in a lush mountainous landscape that’s renowned primarily for its historic wineries. The trees look like broccoli and mist is ever-present, giving everything a tropical feel. The area is also impoverished and difficult to access: the capital, Tbilisi, is a tortuous two hours away by car. To the untrained eye this is the worst-possible location for a classical-music festival. But then again, the place’s history makes it ideal for the purpose.

In 19th-century imperial Russia, Tsinandali was the home of Prince Alexander Chavchavadze. He entertained guests from across Europe, raised Georgia’s esteem in the salons of St Petersburg and kickstarted the country’s winemaking industry. Under him, Tsinandali was a multicultural realm where one could hear French, Russian, Armenian and English.

In contrast today’s Georgia, and the Caucasus as a whole, are a prickly world of enmity catalysed by the collapse of the USSR. Could Tsinandali be the fount of culture and unity that it once was? Through music, Ramishvili believes it might. A softly spoken man who carries himself like a king in exile, he talks with confidence and aloofness. “I am a businessman but I am also part of society,” he says. “And in the Caucasus there are many misunderstandings.”

In 2012 Ramishvili’s company, the Silk Road Group, leased and restored the prince’s 18th-century palace (it is now the most visited building in Georgia) and revived the surrounding winemaking industry. To create the infrastructure for the festival he then added two hotels – one for guests, one for musicians – an indoor concert hall and an outdoor amphitheatre. The latter sits above the old wine cellars which, to Shoshani’s delight and surprise, naturally amplify sound.

While the works were underway, a team of conductors and music directors scoured the Caucasus and the former USSR for talent. (The orchestra, though billed as Pan-Caucasian, also includes people from countries such as Ukraine, as any dialogue in the Caucasus will naturally dovetail into former-Soviet relationships.) The musicians who were selected are, to say the least, a varied bunch.

For most of them this is the first taste of life on the road, living in close quarters with other musicians – and egos. During rehearsals they are focused and professional; it’s easy to forget that many are still teenagers. But once the conductor dismisses them, the feeling is that of a school break. Back at their digs, a young quartet plays table tennis; an older couple share a cigarette on the veranda; some play chess; many, as young people often do, simply play on their phones.

“The atmosphere is more like a family. Instead of having [cliques] from each country we’re slowly blending together,” says 22-year-old Georgian-Canadian violinist Maia Siradze. “I heard about Tsinandali and knew I had to be here. I grew up in Canada but I feel much more Georgian. In rehearsals I was starting to cry – it’s beautiful, there is so much energy and commitment.”

Siradze sits behind second violin Galina Korinets, an energetic tattoo-covered 24-year-old Ukrainian who is one of the more experienced musicians in the orchestra – evident by the way her peers glance at her during rehearsals, looking for cues or reassurance. While most kids are preoccupied with the talent-spotters in the crowd, to Korinets it’s the human interactions at this event that are far more important. “Some people make friends, they start playing together. Some people even fall in love – which we already have here.”

Whether all or none of the musicians will go on to become global sensations, no one can say. One thing, however, is a given: by the end of the two-week festival they will have improved more than in a year back at home. This is thanks to the eminent directors, teachers and musicians who have been training them since early August. Chief among them is conductor Gianandrea Noseda: the Italian maestro is fabled in the classical music world and holds posts from St Petersburg to Tel Aviv. As with many of those involved in the festival, it’s the political angle and the chance to build a new orchestra that has piqued his interest.

Although he is working with youngsters, Noseda believes that he must treat them as world-class professionals if they are to become just that. This means opening the festival with Gustav Mahler’s complex, 80-minute-long second symphony. “In a way, Mahler’s second symphony is a monstrosity: five movements, a big orchestra, big chorus and two soloists. But this is the first edition of the festival, when an orchestra is being born, so it’s better to make a statement, to show [the musicians] that this is the Everest,” he says. “It will give them the impression of how important commitment is to reaching the highest quality.”

As the musicians take their seats on a chilly September evening, the audience members shuffle in – and they’re as varied as the orchestra. There’s the crème de la crème of Tbilisi society; foreign dignitaries (including the ceo of the London Symphony Orchestra); renowned musicians; and Orthodox priests.

The performance, long though it is, is over in one breath – and to those who have been following the orchestra’s progress since early August, it is as much a relief as a joy. Shrieks of a new sort fill backstage: everyone is delighted. Roses are flying and Noseda paces in a white dressing gown, looking more like an exhausted athlete than a conductor.

At the celebratory dinner later that night, a young woman who declares herself unmusical asks a friend whether the performance was objectively good. The answer she receives is positive – but that’s irrelevant. The concert is about much more than just prowess. It doesn’t so much matter how the orchestra played together as that they did play together. Oliver Zeffman, a young conductor who worked with the musicians early on, puts it very simply. “The two clarinets, for example: one is Armenian, one is Azeri. They get on really well,” he says. “Because they make music together.”

Conflict in the Caucasus

Though conflict in the Caucasus can be traced back to time immemorial, today’s string of misunderstandings goes back to the 19th century, when the land was divided between the Russian empire in the north and the Ottoman empire in the south.

As the two giants disintegrated during the First World War, animosity between the various ethnicities in the region reached a climax, leading to the Armenian genocide perpetrated by Ottoman Turkey. Enforced stability followed under the Soviet Union but, when this giant also met its demise in 1991, smaller states began to emerge, bustling for recognition. The outcomes, to name a few, were: the Georgian Civil War; the ongoing Nagorno-Karabakh conflict between Armenia and Azerbaijan; and two wars between Chechnya and Russia.